I was leaving Colorado with a load of pipe heading for Midland, Texas, and running down US 287 between Springfield and Campo, Colorado when I  noticed the truck was sounding a bit different.

By the time I got to Boise City, my eyes were beginning to water, so I pulled into the Love’s truck stop to check it out. Early suspicions prove to be correct; the exhaust flex pipe behind the turbo had broken, and Murphy’s Law means it’s blowing the fumes into the heater intake and pumping them right in the cab. With the heater set to re-circulate and the windows open I can still run along without having to breathe too many fumes. 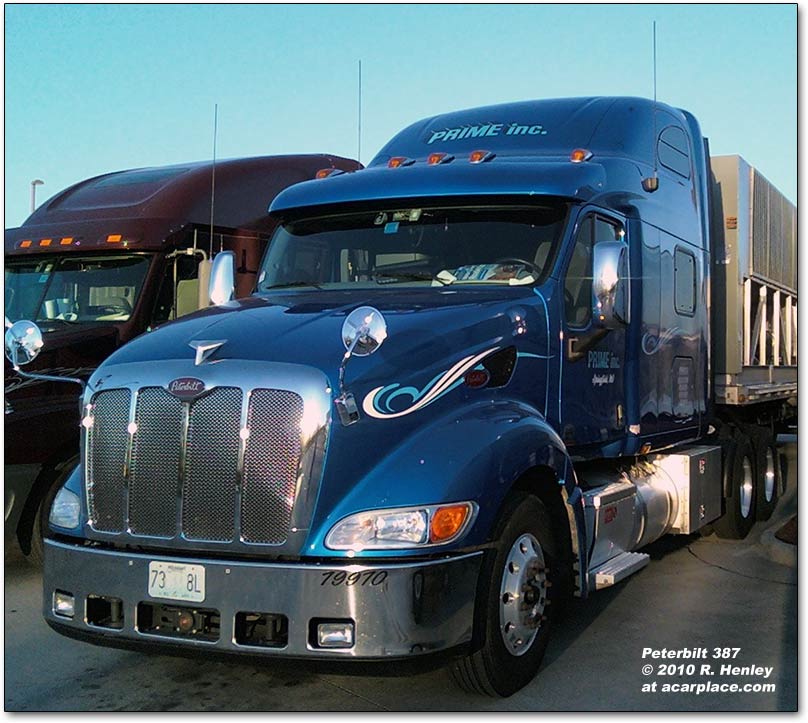 I got the load of pipe kicked off in Midland and called my road assist people to find out where the closest Peterbilt dealer is so I could get a new piece of flex pipe to fix the truck. This netted me two pieces of good news, the first being that the closest Pete dealer is right down the road in Odessa, and the second is that the flex pipe is a warranty item. The second item came as a pleasant surprise, as the exhaust flex pipes were considered a “consumable item” on my previous Freightliner.

I’ve done enough of these on several previous trucks to know that it can be done with basic hand tools in a truck stop parking lot in a couple of hours, leaving plenty of time to get the required rest and be in Wichita Falls the next morning for my next pickup.

I got over to West Texas Peterbilt at 5:15 pm, and go into the shop and explain the problem and got pointed to Marc Phillips. I give him the VIN number and odometer reading (98,144) for the truck. It takes him about 30 seconds of typing on his computer keyboard to confirm that the flex pipes are a warranty item, and about a minute of consultation with Robert in the parts department to confirm they have at least half a dozen of the required part in stock.

I’m in a bit of shock right now, having gotten used to dealing with Freightliner service departments for the last couple of years. I’ve been to Freightliner shops where it took longer than this to find the service writer, let alone get it written up. However, we still have the trick question to answer, that is how long till you can get started? The answer was “About as long as it takes you to drop your trailer and pull into the fourth bay.”

Sure enough, when I pulled up to the fourth bay, the door is open and a tech named Charlie is standing there to guide me in. Before I even got out of the truck he’s opening the hood to get started. I looked for the drivers’ lounge to see if I could score some free coffee; not finding any signs to direct me I headed for Marc’s desk to ask, where he gave me a piece of paper to sign because they were done with the repair.

I thought he was joking with me. First off, I’ve had enough time to smoke half a pack before I can find out if they can even get my truck in by the weekend at some of the Freightliner shops I’ve been to. Second, I’ve changed enough flex pipes to know that it’s not an easy job, and usually takes over an hour even in a shop with all the right tools.

When I get back to the truck, Charlie showed me the old flex pipe, and part of the reason the repair went so quickly is due to the design of the part. I’m not certain if Cummins or Peterbilt needs the credit here,  but the flex pipe has flanges at both ends instead of the traditional slip fitting that’s been used forever, meaning it’s easier to change, no air chisel required. The additional benefit is that you only have to change the one that’s broken instead of having to replace both flex pipes at the same time. Both factors contribute to the speed and ease of the repair.

By 6 pm I was hooked to the trailer and heading out the driveway. A truckload of kudos for Marc, Charlie and Robert at West Texas Peterbilt in Odessa, who provided a very short but extremely pleasant repair experience. The only problem is, I never did get to see if they had free coffee in the drivers’ lounge.